I Just finished sewing together all the blocks for my challenge quilt. I belong to an art quilting group called Cutting Edge and we decided to make quilts to show our own personal journey with racism.  I wrote about this in my last blog post, with a picture and explanation of  the center block.  Some of the pictures are from my senior yearbook which gives you an idea of how
few Black girls were 'integrated' into our school. About sixteen into 850 some White girls.
It couldn't have been easy for them, to say the least. For me,  it was the first time
I had ever met or talked to a Black person. I had seen Black people when we went to downtown Milwaukee to see our dentist or go shopping. But there were no Black people in our neighborhood.
For the 2020/2021 school year, Divine Savior/Holy Angels
reports that 28% of the students are students of color. 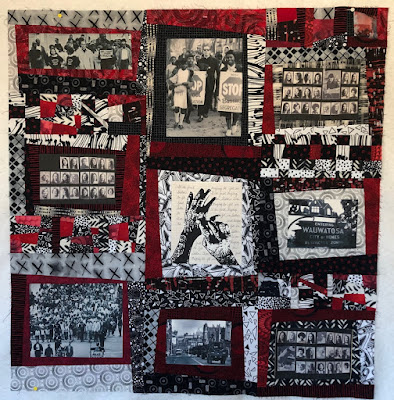 The other pictures show some of the many marches and protests of those times. There's even a picture of  National Guard tanks on the streets of Milwaukee from the summer of 1967.  Although that is considered the 'summer of love' it was also the summer of hate and discrimination in Milwaukee and other cities. There were 199 consecutive days and nights of marches to protest unfair housing practices (Redlining)  and school bussing and segregation. Fr. Groppi was one of the leaders of the protests.
Pictures are courtesy of the Milwaukee Journal,
Wisconsin Black Historical Society, Milwaukee Public Library
and the Milwaukee Journal /Sentinel.
As time went on and I lived in other areas of the world and country I had Black coworkers, friends, and boyfriends. I currently live in a county where Blacks make up only 2% and Latinos 23%.
Wauwatosa where I grew up is currently 86% white with 5% black.
Posted by Jeanne Aird at 1:46 PM No comments:

It's been a while since I last posted anything. I've been busy working on a new quilt for a challenge from my Cutting Edge group.  The topic being, My Personal Journey with Racism.  This challenge has been very thought provoking, to say the least.

I was born in Milwaukee, Wisconsin. At the age of five, our family moved to Wauwatosa, a suburb of Milwaukee. You might have noticed that Wisconsin, especially Kenosha and Wauwatosa, have been in the news lately for all the wrong reasons.  There have been a couple of what appears to be racially motivated incidents of police killing young Black men. The September 24th New York Times reported that Milwaukee is among the most racially segregated counties in the United States.

After grade school, I attended Divine Savior High School. Sixteen courageous black girls entered Divine Savior-Holy Angels high school in September of 1969. They 'integrated' into the 850 some white girls.There were four Black girls to approximately 220 white girls in each of the four grade levels.They came from Holy Angels High School which was located in the 'inner city' of Milwaukee. The two schools merged that year due to decreasing enrollments at both schools and a decrease in the number of teaching nuns.

One day in religion class, Gwen, one of the Black girls was drawing on her hand with white chalk. When Sr. Mary Margaret asked her, "Gwen, what are you doing?" She responded, "I'm just trying to fit in Sister." That really struck me and still does. What was it like for these girls to be so outnumbered by white girls? 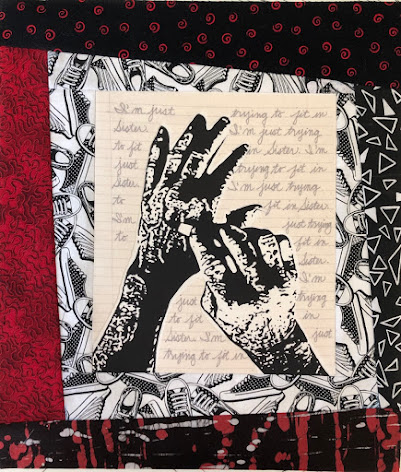 I'm still working on assembling some of the other blocks for this quilt,
but thought I'd post a picture of this one. My husband photographed my hands in the position above, showing one hand drawing on the other with chalk.
I then used Photoshop to modify the photo. The writing in the background was hand lettered
and printed to organza, then fused to the  photo.

Posted by Jeanne Aird at 2:31 PM No comments:

Email me regarding workshops in dyeing, shibori, painting fabric & More

"Art enables us to find ourselves and lose ourselves at the same time." Thomas Merton

Thank you for visiting. Please respect my work as it is original, mine, and protected by copyright law. No images on this site may be copied, altered, printed or reproduced in any way without written permission from me.